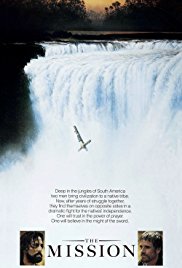 IMDb. "The Mission." IMDb.com, Inc, https://www.imdb.com/title/tt0091530/
The Mission
The Mission. ​Bolt, Robert, Dir. Roland Joffe,  Prf. Robert De Niro, Warner Bros, 16 May 1986.
In English class, we watched The Mission and discussed the movie. This movie fits within the pillar of recognize perspectives because it explained the time period of Spanish colonization from a new viewpoint, the native converts of Spanish missions, which I had never learned about before. Furthermore, the discussion supported the concept of this pillar in that it showed a different depiction of the native people than the one I was used to learning, and taught me about a different culture. This source addresses my overarching question in that it shows how Native people being colonized by Spain were not necessarily forced to assimilate, but some chose to dress and act European. It also shows another example of how indigenous peoples were told to feel inferior to Europeans. This source also connects to history, because it is an account of real events.